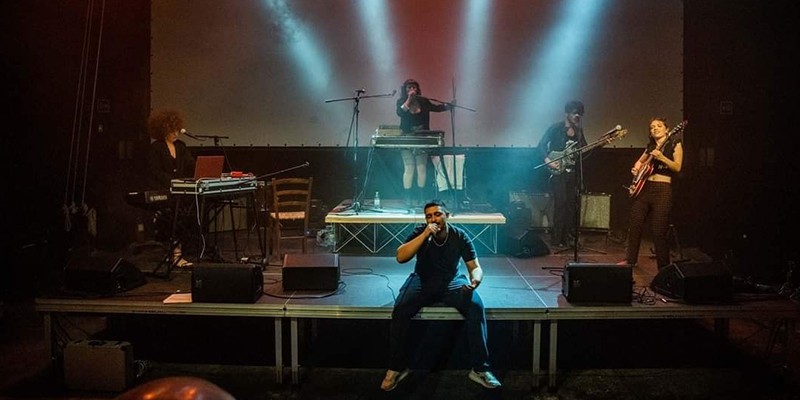 Last Saturday, the 18th of June, in Spazioporto (Taranto) the concert of the new band composed of the finalists of “FAME - INNOVATIVE MODEL for YOUNG ARTISTS CROSS BORDER LABORATORY”, the project intended for young Apulian singer-songwriters, was presented.

During the event, included in the Medimex activity program, Cristiano Cosa, Roberta Russo, Marina De Sario, Donatella Spinelli and Giannicola Speranza staged, in front of a large and observant audience, a show in which they put themselves in the game by rearranging their songs in a new and choral key, mixing music, styles and talents.

An engaging show that has been able to perfectly represent the five souls of its protagonists, accompanying the spectators in cheerful and easy-going, romantic atmospheres and in other even more introspective ones. Among those present were some of the most well-known artists of the Italian pop scene, actors and journalists who greatly appreciated the performance of the band.

The concert was the first ever public performance and comes after the activities carried out at the Sociale Theatre in Fasano, the Academy of Street Arts in Bari and the last eight-day phase at Spazioporto in Taranto, during which the artists have perfected the skills acquired.

The songwriters, indeed, were led by 4 experts, Francesco Occhiofino, aka Reverendo, Giuseppe Ciciriello, Carmine Errico and Giorgio Consoli, in a work on the text and on the body, both fundamental in the communicative approach with the audience, and in a practice of self-narration, also through video and social media, which allows them to promote their artistic image through a personal storytelling.

To complete the path, the artists will perform at national and international festivals such as: Cinzella Festival (next 15 July 2022), Civitacampomarano Festival (CB), Podgorica Festival (Montenegro), Tirana European Youth Capital 2022.

The project, promoted by Teatro Pubblico Pugliese and financed by the Interreg IPA CBC Italy-Albania-Montenegro Programme, has as partners the Municipality of Civitacampomarano (CB) in Italy, the City of Tirana in Albania (Lead Partner) and the RTCG - Radio and Television of Montenegro.