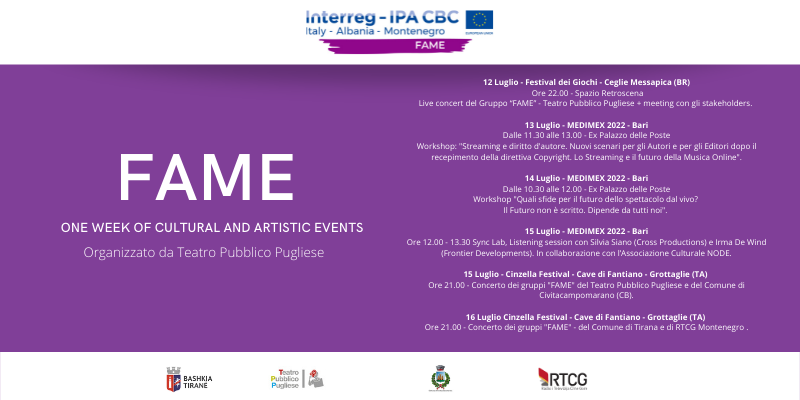 FAME project, 'One week of cultural and artistic events', from 12 July in Puglia
Overview

"One week of cultural and artistic events", five days of meetings, concerts and workshops organized by Teatro Pubblico Pugliese as part of "FAME - INNOVATIVE MODEL for YOUNG ARTISTS CROSS-BORDER LABORATORY", kicks off from Tuesday 12th July. On 15th and 16th July the artists from Puglia, Molise, Albania and Montenegro involved in the project will perform in live shows at CINZELLA FESTIVAL.

The event is part of the project promoted by Teatro Pubblico Pugliese and financed by the Interreg IPA CBC Italy-Albania-Montenegro Programme. Its partners are the Municipality of Civitacampomarano (CB) in Italy, the City of Tirana in Albania (Lead Partner) and the RTCG - Radio and Television of Montenegro.

"FAME" is an accompanying path, intended for pop, rock and trap songwriters between 18 and 35 years old, which aims at strengthening their artistic and digital communication skills and which will include the creation of a video format for TV, as well as the foundation of a new music project.

During this week, the artists based in Puglia, Molise, Albania and Montenegro involved in the project will meet for the first time. They will attend together a cycle of meetings and workshops as part of the Medimex Festival in Bari and perform during the Cinzella Festival in Grottaglie (TA).

• Workshop: "Streaming and copyright. New scenarios for Authors and Publishers after the implementation of the Copyright Directive. Streaming and the future of Online Music".

Workshop "What challenges for the future of live entertainment? The future is not written. It depends on all of us".

Concert by the Teatro Pubblico Pugliese and the Municipality of Civitacampomarano (CB ) groups.

Concert by the the Municipality of Tirana and RTCG Montenegro groups

In Puglia, the project has fostered the creation of a band formed by the very talented Cristiano Cosa, Roberta Russo, Marina De Sario, Donatella Spinelli and Giannicola Speranza, who have already performed during the Medimex Festival on the 18th of June in Taranto, in which occasion the young artists have rearranged their own solo compositions in a new choral way by mixing their music, styles and talent.

Below, the names of the artists from the partner countries:

In conclusion of the path, the artists will perform at the Civitacampomarano Festival (CB), Podgorica Festival (Montenegro) and Tirana European Youth Capital 2022.